skip to main | skip to sidebar

Why to use DESCALER... 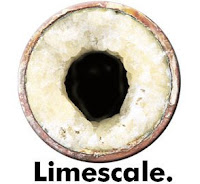 What is hard water?
Water described as "hard" is high in dissolved minerals, specifically calcium and magnesium. Hard water is not a health risk, but a nuisance because of mineral buildup on fixtures and poor soap and/or detergent performance.
Water is a good solvent and picks up impurities easily. Pure water -- tasteless, colorless, and odorless -- is often called the universal solvent. When water is combined with carbon dioxide to form very weak carbonic acid, an even better solvent results.
As water moves through soil and rock, it dissolves very small amounts of minerals and holds them in solution. Calcium and magnesium dissolved in water are the two most common minerals that make water "hard." The degree of hardness becomes greater as the calcium and magnesium content increases.